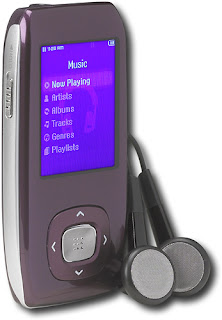 This weekend, Bear told me that he was going to buy my wedding present and give it to me now. I have to admit that initially I was suspicious. Why would he give it to me early? Was it a naughty nightie or something he wanted to try out right then? It wasn't a porno, wasn't? I admit to watching the occasional Jenna flick, but I didn't want one as a wedding gift! Hell of a story to tell at your bridal shower, don't you think? Not really. Hmm. what else then? Membership to a gym so I'd quit complaining about my lack of weight loss? The closest gym is about fourty miles away, so that wasn't it, either. I've had my fill of invitation books, wedding how-tos and bridal magazines, so I was hoping he didn't buy that, so... I was stumped.

We took our usual trip to Bangor on Saturday, and he dropped me off at Borders while he got my present. I spent the twenty minutes or so perusing the romance, fantasy and literature aisles. I was too keyed up about my new present to really concentrate, though. Bear called me before I was in the M's of the Literature section and I ran out to the car. In my seat was not one, but TWO mp3 players! He'd gotten me an iPod and a Samsung, and said I could choose which one I wanted. He remembered that my old mp3 player doesn't work any more and thought I deserved to be treated to a new one. I chose the Samsung (mostly because I hate iTunes), and we took the iPod back. I love it! It's purple, about the same size as the nano, and holds 2 gigs of music. I can record voice, store movies and photos... it's pretty awesome.

And you know what? I would never have bought it myself.

Bear sees what no other boyfriend ever has: that I will treat other people many times before I will treat myself. I so love to make him happy, for example, that I buy him whatever clothes, gadgets, or books that he wants/needs. I, however, rarely do the same for me. I have one pair of black work shoes, and they are four years old. It's so easy for me to say, "no, you shouldn't buy that, you could pay bills with that money," when it's something for me. but when Bear (or anyone else I've dated) looks at me with that, "Aww, please" expression, I can't say no. In the past, that has been used against me. I've been told more than once that I need to learn to say no. The great thing about Bear is that he makes sure I get spoiled a bit, too.


In other news, family members have gotten together to outvote me - the swatch invitation is the one we're doing. Thanks for everyone that voted for the thumbprints (I think we may use the thumbprint heart on the outside envelope). There is just so much information to get through, the swatch invitation works best. Bear had to promise to help me with them, so we'll see how it goes. When I have one finished, I will scan it for you.