Happiness can be yours for the bargain price of $800 a month!

When Bear and I first got together, our relationship moved very quickly. We had our first date in the middle of November, he first asked me to marry him at Christmas, I moved in with him the following March. The same spring I moved in with him, we started the arduous process of combining our finances. One of the things that became clear to me early on was that Bear was in a lot of financial trouble and that it wasn't his fault. You see, Bear's mother passed away when Bear was 18, after a long battle with cancer. Because she had been sick for so long, Bear had been forced to work full time as well as go to school full time just to make ends meet. It is tough to make ends meet, however, so after his mother's death Bear was stuck with a pile of past due bills. We talked a lot about the bills he had in collections, and how he couldn't get a loan to pay them off because they had ruined his credit score. My credit was excellent, however, so we hatched a plan for me to take out a $10,000 dollar loan and pay off most of his debt and a bit of mine as well. The loan was for three years and had a monthly payment amount of $351.52.

We have been paying that amount each month for nearly our entire relationship. It was supposed to be paid off this summer, but due to life getting in the way (doesn't it always?), we are a few months behind. This loan has become a pain in our collective ass. We want more than anything to get the frigger paid off so we can put that money towards other things.

Last week while Bear and I were both not working (his last week of layoff, my Feb. vacation), we hatched a plan. A budget that will get the loan paid off in August, just one month later than originally planned. It means, however, that instead of paying #351.52 a month, from March to August we will be paying $800 a month.

On the one hand, I'm thrilled that we found that much money in our budget to throw at our debt. I didn't realize we had that much left over after bills are paid. On the other hand, though, it makes things *very* tight for us for the entire spring and most of the summer months. It means fewer camping trips and cookouts, fewer yarn and fiber purchases, fewer adventures in the world together. I'm slowly becoming accustomed to this, but it hasn't been easy. I know that this is important and that we are doing what's best for us. But I am going to need a lot of help in putting my debit card away for the next six months. A lot of help. Any ideas for things we can do on the cheap?
at 8:18:00 AM 2 comments: Links to this post

I'm back in school today. I took the truck to work, but the roads weren't all that bad, considering that we got 28.1" of snow yesterday. I will have to have Bear take a pic of me in front of the snowbank at the end of our driveway - it's taller than I am. I did take some pictures for you to enjoy. Especially Alice who is in Georgia and doesn't get snow like this: 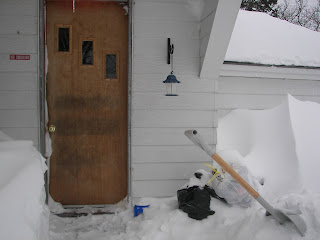 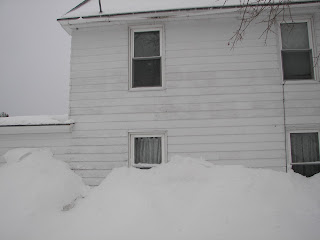 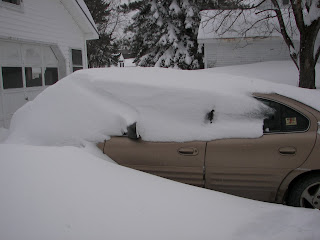 For a frame of reference, the two windows that are nearly buried are my livingroom windows. The bottom of the sill is supposed to be eye level. I had to shovel them out so we could have some light in the house.

Back to school - Just kidding!

Today was supposed to be my first day back to school, but thanks to about twenty inches of snow that fell overnight, vacation has been extended by a day. We are supposed to get another five to ten inches today as well. This afternoon I will take some pictures after I snowblow the driveway so you can see how much snow we have right now. As for now, I've had my breakfast and my coffee so I think I'll do a quick load of dishes and then knit.

This morning my husband isn't at home. He's not working, and he hasn't gone on yet another grocery run.

This morning, my husband is beginning his back-to-school adventure.

As I type this, he is at a computer in the local adult ed office, taking the Accuplacer test. Once he finishes that, he can begin taking the classes he will need so that he can go on to college.

I am so proud of him.

Congratulations, Baby, on starting this new journey. I love you - and I'm behind you all the way.
at 9:28:00 AM 3 comments: Links to this post

"I wish I could say something witty and inspirational, but that just wouldn't be our style."
~Keanu Reeves in The Replacements.

That's how I feel. Sick. I have my first cold in a couple of years and it is pummeling me nearly senseless. I'm a terrible sick person. I'm whiney, I'm needy, I want everyone to pity me, pet me on the head and make me grilled cheese sandwiches and hot cocoa. I want people to press their palms to my forehead and tell me that it's warm (even if it isn't). I want to lay on the couch and watch brainless t.v. and look as pitiful as possible so that people will take care of me.

None of that happens, of course. Instead I take Tylenol Severe Cold and drive to school where I attempt to speak loudly enough that the kids can hear me. I pretend not to notice that they watch me blow my nose again and again and that they laugh when my voice cracks. I go to my other job and tell people I'm well when they ask how I am. I keep working and taking meds and hoping that I'll feel better soon. Because I have to.

But that doesn't mean I have to be happy about it. Or that my blog posts need to be very witty or inspirational. Because it's just too much.

Bear has been laid off for almost two weeks now. He's said more than once that he's ready to go back to work, but I'm not sure I'm ready for him to go back. In the last week he totally redecorated/renovated my craft room (see my other blog for pictures), cleaned the house (it's SPOTLESS), organized a bunch of things that really needed it (including the food cupboards which were a mess), and even done laundry.

I could get used to this!

It hasn't been perfect - I had to work both jobs yesterday and he was definitely not happy when I finally got home and got on the computer instead of cuddling him on the couch. I hope to make it up to him tonight. He has also been battling a nasty cold that settled into his chest and has been making life pretty miserable for my dear Bear.

Overall, though, I think this layoff has been more good than bad - and I had no idea that I would ever be saying that. 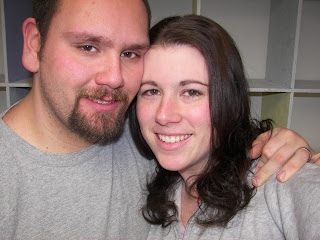 Bear and I in front of the storage area he built me last week.
at 7:51:00 AM 5 comments: Links to this post