I made apple bread yesterday. It is a quick bread (no yeast required), so it took next to no time to prepare. I did have the help of my beloved Bear and Kitchenaid Mixer, which I admit helped. When the hour went by, this came out: 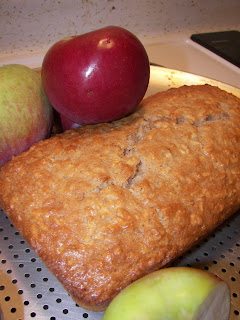 Doesn't it look yummy? It isn't as sweet as I'd thought it would be, but there's no sugar in the recipe so it makes sense. I plan on making it again this week, and may add a bit of brown sugar to the recipe to heighten the flavor. I'll probably make several loaves to share with people and use up some of our apples. We still have probably 15 pounds after two pies, a loaf of bread and a big bag given to Bear's aunt and uncle. If my brother and T-licious decide to visit us before the wedding next weekend, I'll have to give some to them, too.

Bear and I had an awesome day yesterday, despite working the whole day and getting off to kind of a shaky start. We both woke up grumpy because we were forced to sleep in the guest bed Saturday night. Why? Because we got a ton of rain this weekend, and when it rains the roof leaks ONTO my bed (it drips down the light fixture - not a good situation). So Saturday while I was at work, Bear pulled the light out of the ceiling to avoid an electrical fire and put a bucket on the bed to catch the drips. Sunday morning we went to breakfast because we were too tired to cook and because we desperately need to get groceries. While there, we discussed what to do. The conclusion we came to is that we would have to switch bedrooms. This is not an easy task. Our bed frame alone weighs over two hundred pounds (Bear made it out of hardwood lumber). There was a huge chest of drawers we had to remove, two bed sets, etc., etc. We did it though. We worked for about six hours and got everything moved around. What is now the guest room is still a complete wreck, but we can't really put it together until the roof stops leaking anyway. Our new room looks amazing. It will take some getting used to, but so far, I like it. I'll have to take pictures to show everyone. Throughout the day, I kept expecting Bear to get frustrated (or for me to). but we maintained good humor the entire time and spent much of the day being affectionate and cuddly. I love when that happens! It made what could have been a stressful day a delightful one.

Good Luck on getting the roof fixed. We had a similar problem a few years ago. It was my daughter's room and we had to fix right away. What a pain.

That bread looks yummy! I have a sweet apple bread recipe if you would like.

Ok---I know I keep asking, but I'm interested in your apple bread recipe. I made banana bread this weekend - it turned out pretty good, so I'm feeling the breads now, too!

This looks like it would be unbelievable toasted, with real butter on it.