So how are you, really? 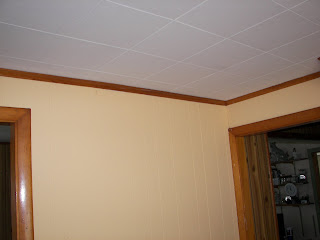 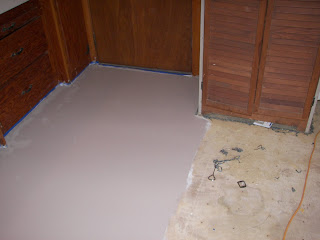 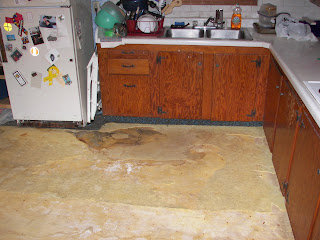 This is the last week of my summer vacation, and I have to admit, I'm looking forward to going back to school. I am learning that being in this house all day working on endless home improvement projects is detrimental to my mental well-being. I am at least making progress on some of those projects - I've included pictures for your enjoyment* - but I can't wait to be back in an environment that not only uses my brain, but appreciates it. Teaching can be thankless and exhausting, but at least it's what I enjoy doing.

It's also been almost two months since I got married. I still don't feel any different, but thankfully people aren't asking me as often. With this damn house I sometimes feel like I've done Cinderella in reverse, though... I started out with the fancy dress and dancing and ended up scrubbing floors. Or painting them, in my case. I know I should be glad that Bear and I have remained the same since our wedding day, but lately I'm almost... disappointed. I was so focused on the wedding for so long (Bear first asked me to marry him about seven weeks after I met him), I chose to ignore certain things. Now that I don't have the wedding taking up space in my brain, those things I ignored are becoming harder to.

I know you want examples, and I'm going to try to give you some. Everything is kind of jumbled up in my head and confused, so no guarantees that this will make sense.

I guess what I'm most disappointed about is that I no longer feel "special." This has very little to do with the wedding, believe it or not. When Bear and I first started dating, he constantly expressed shock and awe that I chose to be with him. He was amazed at how clever, funny, and sexy I was and told me that on a regular basis. As with all relationships, that has fizzled out - to the point where he doesn't find me amusing all that often. I feel like such a selfish hoebag writing this, but there you have it. The thing is, Bear was the first person other than my father who made me feel valuable. I guess this girl got used to it, and misses it. I'm still aware of my fabulousness (no worries there), but I guess now the total number of people who agree with me is back down to one. Daddy. I realized this morning that this is why I want a dog so desperately. Dogs are thrilled by you every day - and that never changes. A dog is so appreciative you chose him, he showers you with love the rest of his life. A larger part of me misses that than I realized.

Secondary to all of this (but still important) is sex. Don't read any further if you're afraid of getting too much information! I have always enjoyed sex, and a large measure of my self-worth is based on how good I perceive I am at it. Don't laugh; I'm damn good. I don't "make love," insisting on all that emotion and candles and crap. Sex with me is like an amusement park. I'm fun, full of surprises, and leave you tired but happy at the end of the day. What's not to love? Right?? I'd have thought I'd just described most men's perfect scenario. Bear begs to differ, though. I don't want to say we're going through a rut, but I'm learning that we operate on different schedules, and mine runs much faster than his. And the more I try to entice him, the less interested he gets. I'm learning it is impossible not to take this personally. How can I not, regardless of the "It's got nothing to do with you" speech I get almost daily? I never thought of myself as highly sexed, but it turns out I must be because this situation has reached the ridiculous at times. Imagine a husband literally fighting off the lascivious advances of his wife, to the point where he has to pin both of her hands to the bed to keep them off him. Then imagine him shaking his head as she winks and says, "this works for me, too."

So how am I really? I'm not sure. Life is still good, I guess. I think I'm just alone too much during the day, which gives me too much time to ruminate over every minor detail in my life. I keep hoping that if I go back to work, these issues will work themselves all out and I'll be embarrassed that I shared this much with you.
Especially as I've barely discussed it with Bear.

*A note about the pictures: The first one is of the "butterfly bush" paint job I finished on the walls yesterday (primer plus three coats of paint) and the ceiling (primer plus ceiling paint), the second is the "natural bark" paint I started yesterday on the floor (pulled up carpet, sanded subfloor, primer and two coats of paint), and the third is what the floor looked like before I began painting, but after I'd ripped up the carpet.
at 9:54:00 AM

Hi! Congratulations on your wedding of 2 months! I saw your pictures you posted in July, and it looked like a beautiful day, as did you. I am celebrating being married 20 years today, I can't believe it, makes me feel so old.

I am a School Social Worker, so I have been off the summer too, but will be going back in a few weeks. I have been doing home improvement projects all summer too, and it can make you pretty wacky and drained. I love the color of your walls. Your kitchen floor is coming along great. My kitchen floor is my next project and I am dreading it.
Anyway, just wanted to say hi and tell you your blog is really funny. Your a good writer and I love your honesty.
I will be back for sure!!