Lookit what I made, part II! 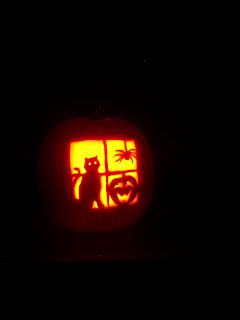 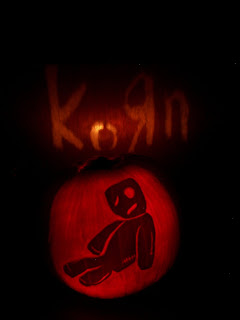 These are two pumpkins I carved yesterday. The first one is pretty traditional - I used a pumpkin carving kit and template. It's pretty cute. The second one was my husbands idea - if you are a fan of KoRn (the band), you'll recognize the little figure on my pumpkin and the band logo behind it. It took me about three hours to carve this one! I cut out the logo backwards in the backside of the pumpkin so that when the candle is in it, it glows on the wall behind it. The figure in front (the unhappiness doll) is actually the peel of the pumpkin - I shaved out around him with a lemon zester so that the white part of the pumpkin was exposed. That allowed it to glow like it does. Click on it to make it bigger. I am SO PROUD OF THIS PUMPKIN! It is yet another example of how together, Bear and I make awesomeness happen.
at 11:46:00 AM

Wow! I wish I had that kind of talent. I just try not to cut a finger off when I carve a pumpkin.