Where an oft-used expression comes true 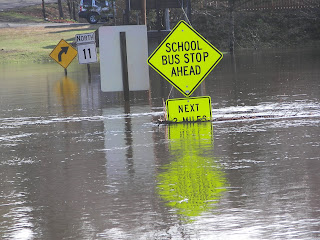 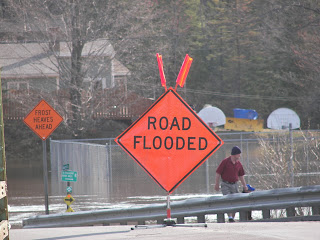 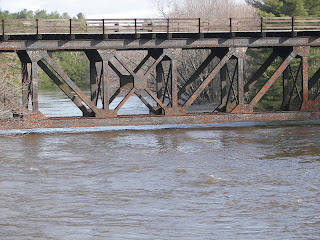 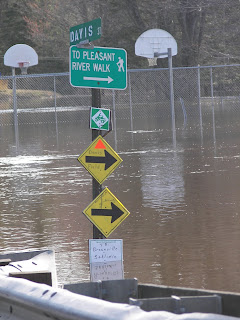 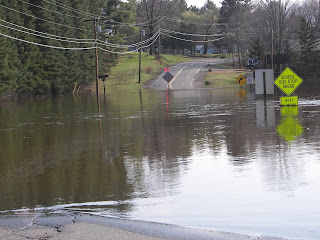 In Maine, there's an expression: "You just can't get there from here." Most commonly, this is said to tourists looking for a senic location they just can't seem to find (often because they're idiots and they're in the entirely wrong part of the state!).
I never thought I'd be using that phrase to call out from work.
The road I drive to work each day is flooded. It's flooded not even three hundred yards from my house. I left for work today, glad that the sun was shining after yesterday's heavy rain. My happy mood didn't last long - the road is closed. As in impassible. Holy crap! I wondered if people were just being cautious... until I really looked and saw that there is probably eight feet of water covering the lowest part of the road. Holy. Crap. I turned around and drove to the local gas station to ask if the back raod out of town was passible - if so, it would take me maybe six miles out of my way, but put me back on the road to work on the other side of the flood in front of me.
"I don't know if you're gonna be able to get to Millinocket," the owner said. "I heard last night that the road was washed out in three or four places."
Thinking fast, I ran through other potential routes. The next closest way would take me more than thirty miles out of my way. "Have you heard about Medford Center?"
The owner raised his left eyebrow and squinted in introspection, one hand lifting the brim of his greasy baseball cap to scratch at the hair underneath it. The hat and the eyebrow came down together. "You can try that way, I haven't heard anything. You're best bet is to call the Sherrif's Department and see if they've had any reports."
I thanked him and got back in my tiny red wagon and headed home. If I couldn't get though Medford Center, I'd have to go clear to Old Town and take the Interstate up. That's at least fifty miles out of my way. Once I got home I called the sherrif's department and asked them what they knew. The dispatcher said he hadn't heard any reports, but he hated to send me out there, since many secondary roads were flooded and they hadn't received reports on them yet because no one really drives on them.
Great.
I called my husband at work to ask him what I should do. He has, after all, lived here his whole life and knows the entire area better than I could ever hope to. Plus, one of his co-workers lives in Medford and might have the inside scoop on the road conditions.
"Well, hon Boob (that's his friend's name - honest!) says that the Medford road is closed, too, so that means you can't take the Joe Raymond Road. You can try going through LaGrange and taking the Howland road, but you'll have to go through Enfield and one of the guys says that's out, too. You're only other option is to get on the Interstate in Old Town and drive north from there."
"Is there any guarantee that I can get through the Alton Bog before I get to Old Town?" I asked, remembering that the Alton Bog is in rough shape on good days. I shuddered to think what it would look like today.
"Well, hon, you'd think we'd have heard by now if it were closed, but you never can tell. The water may continue to rise for a while before going down. You just never know. I wish I knew what to tell you," he said.
I hug up with him and thought furiously. Was it worth taking a fifty-mile risk without a guarantee of safe passage? My little Mildred is not the kind of car that can plow through giant puddles, and I'm not any kind of daredevil. Crap.
I called the school and told them that I wasn't going to be able to make it in today. "I just can't get there from here!" I said. I still can't believe that the old Maine saying has actually come true.
at 7:16:00 AM

Congrats on the size 10 - you're officially smaller than me. I'm jealous!!

I saw all that flooding on the news earlier this week. I hope things are starting to get back to normal.