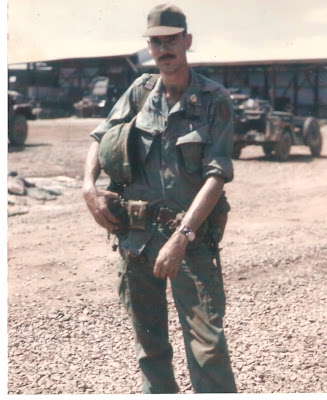 I've never made it much of a secret that you're my favorite. It was pretty clear, even with my first word ("da-da") that I was always going to be your little girl. Growing up I always wanted to be on your team at the family baseball games, wanted to ride with you in the big truck, wanted to cuddle with you during football games, wanted to learn to shoot and hunt in order to spend more time with you. You were, quite simply, my hero. It was many years before I began to learn what made you so heroic. Your endless patience, your love of simple things, your sense of duty, your soft heart - all of these things became part of you because of what you'd lived through, of the choices you made and the things that happened long before I was born.

When I was a freshman in high school, I went with the marching band on a trip to Washington D.C. While there we played on the steps of the Capital, toured the Washington Monument and visited the Vietnam War Memorial. Of all places, the last one touched me most. I knew vaguely that you'd been in Vietnam, and I knew it was a bad enough experience that you didn't talk about it, ever. When I returned home, Mom asked me if I'd gotten a rubbing of Georgie Bailey's name.
"Who's he?" I asked.
Mom was clearly pissed. "He was your father's cousin who died in the war. You should have gotten a rubbing!"
I felt terrible. I didn't even know you'd had a cousin Georgie, or that he had served in the Vietnam war. I didn't really know anything about your time over there, and since you hadn't chosen to share those details with me, I didn't want to ask. I've always been sorry that I didn't get that rubbing for you.

After that, though, I began to listen when you spoke with my brothers. They had all enlisted in different branches of the military, I think because they saw the quiet dignity of your character and wanted that for themselves. You raised us all to be grateful and to do what's right. As each brother came home from deployment, they spoke with you about the military. About war. And as I listened, I learned a bit about what you'd been through.

I learned that you were part of a team that recovered disabled tanks. I learned that you had some near-misses (the story about the bullet hole in the Maine flag that was flying a few feet from your head gave me nightmares). I learned that Georgie, your cousin and friend, was killed not far from where you were. I learned that you had to bring his body home. I cannot imagine how difficult it must have been to look at your grieving aunt and uncle knowing that you'd survived and their own son hadn't. I learned that the Government was going to send you back to Vietnam, even though you only had six months left of service. I learned that you threatened to call "Aunt Maggie" (Margaret Chase Smith) if they forced you to go back. I was floored to learn that it wasn't that you were scared to go back, but that you knew that getting on a plane to return to the war would destroy your own mother. But that's you, Daddy - always thinking of other people before yourself.

I learned other things, too. That you still have days where the horrors of that time overwhelm you. That you aren't bitter about what happened, even though an injury sustained there permanently affected your ability to hear. That you got through Vietnam the same way you get through life - one day at a time, making the best of things, being thankful for what you have and not dwelling on what you don't.

It's because of all of these things that on this Veteran's Day I think of you. It's because of all of these things I'm thankful that you did survive. That you did come home and become my Daddy. There are so many things about that time that I'd like to know. I'd like to record it all somehow so that when your grandchildren are older, they can learn what a great man you are.

That's something I already know.

I heart you so much!

Are you going to date me for the craft fair?

What a beautiful tribute to an amazing man and wonderful father. What an honor to have a man like this as your father.
XOXOX

What an awesome post. You never cease to amaze, or inspire.

PS - (sorry to leave this additional message on such a beautiful post) - but we also take hats, scarves, mittens, etc...you know...knitted stuff! :) I know it may be too late this year since these things take time, but maybe next year we could get you and some knitting friends to each donate a homemade item or two. Just a thought. But thank you so much for your willingness to help our kids.