That's my sigh of relief and relaxation. Bear and I are back from our weekend away (we got back Sunday afternoon). We had a fabulous time. The land did not fail to work its magic on me; I was relaxed the moment we arrived.

Tide Mill Farms is an interesting place, and one that always has something (usually several somethings) going on. No one was home at my aunt's house except the cholocate lab Annabelle, so after saying hello to her we headed down to the barn. My cousin Aaron was there moving hay bales with his tractor before starting the afternoon milking. His wife and children pulled up in their van on their way to the public pool in town and stopped to say hi. I said hello and hugged the little ones, then headed into the barn to play with the calves before watching the milking process.

Baby cows are the most adorable little things in the world. Aaron is trying to increase his herd size, so every spring there are dozens of calves to admire: 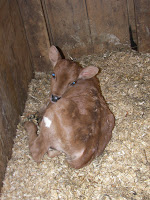 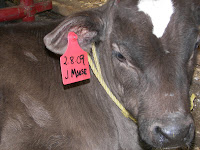 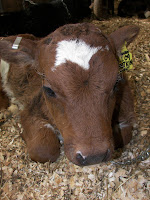 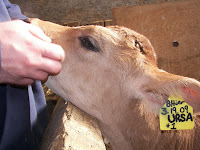 Those ones are cute, aren't they? But there was one calf named Bitsey who totally and utterly stole my heart: 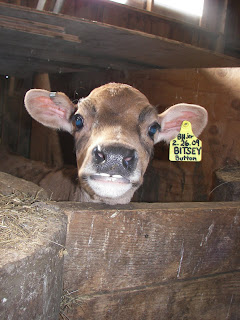 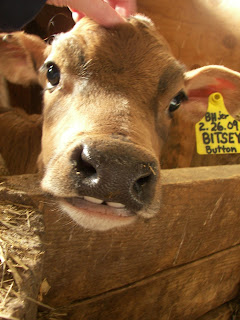 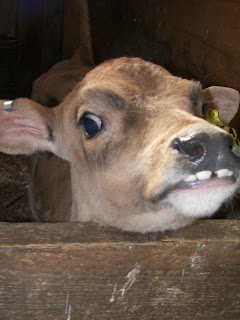 Bitsey has an underbite so her teeth poke out and give her the most comical expression. Isn't she adorable? I wanted to take her home, but was reminded that she wouldn't stay small and cute forever. Sigh. Oh well. I know where she lives and can come visit her any time.

After watching the milking, Bear and I wandered around the coastline for a while. Tide Mill Farms has 1,700 acres and over a mile of shoreline. Their land has fields, forests, mountains, rivers, a dam, ocean frontage... they've got everything. 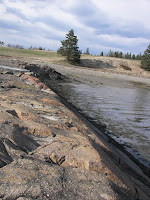 Some pics of the afternoon: 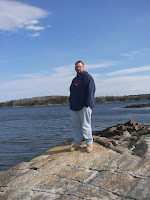 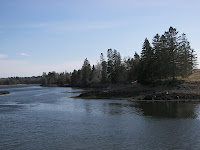 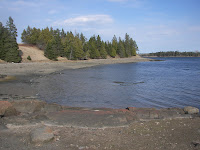 That night at dinner (steak, hamsteak, fresh salad greens, peas, potatoes and raw milk) Bear and I caught up on farm happenings. We learned that the eagles were nesting in the front field (as they have been for over a dozen years now), that the children have been doing tons of fun things as part of their homeschooling (including learning to play violins!), and that life, in general, keeps going. Dinner was filling, the company was terrific, and we got a great chance to catch up. In the morning after milking, Bear and I headed to Aaron and his wife Carly's house to wrangle some pigs and then watch the children while Carly ran an errand in town. The pig wrangling wasn't as exciting as it sounds - we were trying to get three male pigs into a trailer to be slaughtered and leave the girl pigs in their pen. The male pigs weren't having it, though, and totally ignored all of our attempts to move/herd them. Carly did get them in the trailer later that day when they were hungry. So we watched three of the ninth generation while Aaron and Carly did their things. The three kids - Hailey, 8, Paige, 6, and Henry, 3 - were utterly exhausting. They have tons of energy and were all over the place. It was terrific, though. The girls played their violins for us, I made them lunch, we all hung out in the living room, and generally had a good time. The kids are so SMART they amaze me.

Of course, after watching the kids I needed a nap so I went back to my aunt's house and did that while Bear helped out with the afternoon milking. Another fantastic dinner of spaghetti, bread, and more salad greens, and I was ready for bed. Jane, Bob, Bear, and I did all hang out at the kitchen table and talk for a while, though. It is so nice to be in their house - the kitchen is where you want to be, sipping coffee, admiring the view, petting Annabelle, and visiting. I dream about that kitchen when I'm not there. Nowhere else feels quite so homey.

On Sunday we had flying pancakes for breakfast. A favorite of mine since I was very small, flying pancakes are blueberry pancakes that are flung from the stove to the table - a distance of about twelve feet. My uncle Bob is an amazing pancake flyer - he can get them to the table from over his shoulder, under his leg... I was trying to be grown up and not ask for them this time, but they must have known I wanted them because I got them. They were delicious! I caught one pic of Bob mid-fling: 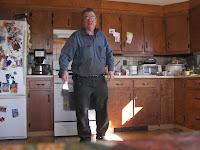 We took a quick trip to West Quoddy Head Lighthouse, the Easternmost tip of the United States. The lighthouse is fantastic and we had the place to ourselves. We took lots of pictures of that, too: 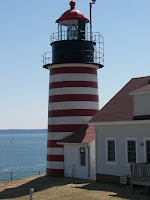 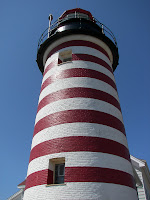 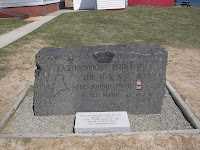 We got back to the farm around noon, loaded up the car with our stuff and some organic meat and milk and took our leave. It was sad to say goodbye to the farm and to my family, especially since it was three years between the last trip and this one. I hope it isn't that long between trips again. This place is just such a part of me. I hate being away from it. Hopefully soon we will get a chance to get back there. Until then, I have my memories, and my pictures, and some pork sausage in my freezer. Life is good.

Sounds like you had a wonderful weekend! Great Pics! And that calf is just too cute!!

Now this post was a good read. You make me want to go for a visit!

Awesome! Now I'm living vicariously through you. What a great place to live...and flying pancakes? Bonus!

Fox - They rent out the farmhouse all summer, you know. They even let the renters play with the calves! Go to www.tidemillfarm.com. Click on rooms. Drool. Book a stay!

Don't you mean she "udderly" stole your heart?!??!

Hahahahahahaha.....forgive me, I'm 7 months pregnant and the weirdest shit amuses me now.

I LOVED reading about your trip. It sounded so perfect from the beauty of the land, the cute calf with with the underbite, the flying pancakes, etc. It is stuff books are made of and very happy couples.
You so deserved this and I'm thrilled for you! I love the pictures.

Now tell me what that kick ass song is. I need a good one.
XXXXX