Yesterday I posted a picture of Jackson as we were coming home. Today I'd like to tell you all about it.

We arose Saturday morning at 4:45 and blearily got into the truck to begin our journey South. we had to be at the breeder's by 9:30 in the morning and it was almost a four hour drive. I stayed awake the whole time which is something of a feat for me. I was just too excited and keyed up to sleep. I'm horribly sick right now, so much of the journey was spent blowing my nose. As the miles slipped by under the truck tires I thought about all the great adventures Jackson and I and Bear will have. I worried about how the cats would treat him, and I hoped that everything would go smoothly.

We arrived at the breeder's right on time. When she brought Jackson into the room, I wondered where my little ball of fur had gone. In his place was a rugged tank of a dog that had doubled in size in the last three weeks. Jackson had become a bruiser! As soon as he was placed in my arms, he snuggled his nose into the place between my ear and neck, sighed, and settled in. My heart flipped over in my chest and I fell in love with him all over again. This, I thought. This is my baby. Totally black with deep chocolate eyes and the biggest, sweetest paws imaginable ... perfect in every way.

We chatted with the breeder for a while and learned that the vet gave him a clean bill of health and he was all ready to go. She said goodbye to him and as she did I heard her whisper, "you're a good dog, Jackson. A good good dog. You were my favorite." Tearfully, she handed him off and we settled him into the truck for the long journey North.

The original plan was to take him to my parents' house and leave him there while we went to the Shinedown concert we'd had tickets for since before Christmas. As the day wore on, however, I was feeling worse and worse. Soon the combination of worry about leaving the puppy and my cold drove me to ask Bear to find someone who'd want the tickets for the show - I was too sick to go. He was relieved, and even my parents said that was probably best. I looked and felt pretty awful. Jackson, for his part, was sleeping on the livingroom floor behind the coffee table. The stress of leaving home and being in a vehicle for the first time combined to exhaust the poor little guy. Mom said he was boring. Both parents were amazed that he wasn't a crazy ball of energy. I couldn't blame him, really. The most disappointed person was my parents' boxer Ivy May. She took one look at Jackson and wanted to play. He just wanted to find a quiet corner to crash in. She just didn't understand why he wouldn't play with her.

Since it was afternoon and we'd given the tickets away, Bear and I decided to head for home. I did manage to sleep this time since I had no energy left at all. Jackson slept most of the way, too. We got home around 7pm and brought him inside. We gave him food and water, spread his blanket on the floor and just watched him as he slept. We were concerned that we'd stressed him out with this very long journey, glad that we'd gotten him home, and absolutely in love with our new family member. The family felt complete finally. We went to bed that night and fell into an exhausted slumber.

That morning we were greeted with the traditional puppy - wagging tail, jumping energy, and lots of wiggling. He'd messed a bit on the floor, had put all his toys in the box of shavings in the place we'd thought he'd use to leave his messes and generally mussed the kitchen about. It was impossible to be upset. What was a little bit of puppy poop when its maker is just so damn cute? We cleaned everything up and set about housebreaking the little guy. He'd never been outside in his life, but he adjusted quickly. Soon he was doing his business quickly and then cavorting about in the snowbanks. Jackson loves the outdoors. We grinned to each other as he jumped and played. This is a dog made for us. We spent the day with him yesterday and learned that he likes to eat, wants desperately to be friends with the cats (who have been standoffish but not agressive at all), and loves to take naps in warm nests of blankets and people feet.

Every time I look at him, snuggle him, play with him, or hold him, I fall in love again. He's perfect in every way and I'm glad that I waited so long to get a dog. He was worth the wait. I hope that as he grows he'll continue to be the happy loving guy he is right now. 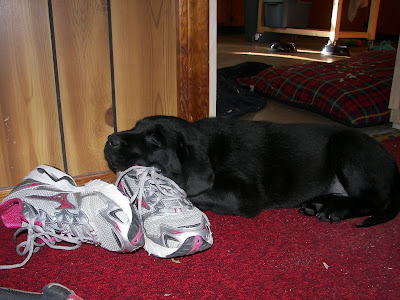 Oh SQUEEEEEE! I can't wait to see more and hear all your adventures with him. You've got a great new friend to pass the years with!

He really is beautiful. The name "Jackson" suits him perfectly.

It's going to be so.much.fun! to follow Jackson's adventures :)

I don't know why I'm crying reading this...well, yes I do, because I feel your joy jumping off the page. What an adorable, adorable boy.

Congrats! What a cutie!

He is so beautiful, and seems like he is perfect for you and Bear. What beautiful eyes. I'm so happy for you, you deserve some happiness,nothing can do it like a sweet, loving dog. I'm looking forward to hearing more about the Adventures of Jackson. I think you have a book in the making. Don't leave out the pictures. So CUTE!!!!!!
XXXXXXX

Seriously, will be keeping you in thought and prayer. Please update after his surgeries and let us know how he is doing.
cam to camLas Vegas Escort