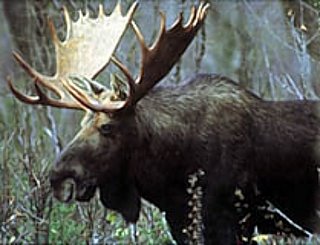 I drive to work every morning on a stretch of road affectionately known as "Moose Alley." The reason for this is because the road I drive on has more moose/vehicle accidents than any other road in Maine (or it seems to, anyway). All year, however, I haven't seen a single moose. I have seen a ton of crows and a single dead deer, but that's it. Every day someone asks me, "Didja see a moose?" After nine weeks, it is just annoying. "No," I sigh. "No moose yet."
Well yesterday I saw my first moose! I was passing a fallow potato field and saw a dark blur in the middle of it. At 6:30 in the morning, it is still quite dark and moose are a very deep brown. At first I thought it was a horse, but after a moment I realized it was a MOOSE! Thankfully it was about fifty feet away from the road and standing still, so I didn't have to worry about hitting it.
A few facts:
So as you can imagine, I was thrilled to be able to tell people about the moose I saw AND that it wasn't in the road. It pretty much made my day. So I continued my commute, a smile on my face. About five miles later, I came around a corner in the road and SLAMMED on my breakes - there was another moose! I don't know how big the first one was, but this one was HUGE. He was going in the same direction I was, trotting in the soft shoulder of the other lane. Once I got stopped and could breathe again, I followed him for about 100 yards until he turned left down a gravel road. He turned and looked at me once, and kept on his path. I thought I was going to have a heart attack. The first moose made me happy, the second one just scared the crap out of me. I was uber careful the rest of the drive to work, convinced that every dark patch near the road was another moose. Thankfully, there were only the two and I didn't hit either one.

It makes me wonder - how often do close calls happen?

Oh my gosh! I noticed a different picture...is that you on The Wheel?!?

Congrats on avoiding a rather large impact on your car, thank God. You don't want to have to deal with that along with wedding plans. Wheeewwww!!!!