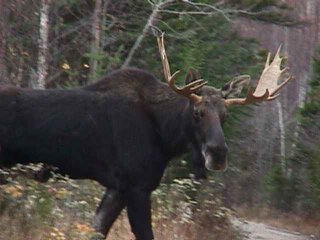 This could have been the moose I saw yesterday. I wouldn't normally post about the same thing twice, but this moose deserves a few inches of blog space. I was driving home in Bear's car (mine is in the garage with a host of illnesses), and I saw a moose in the ditch of the oncoming lane (my left). I came to a complete stop as I'm supposed to and because it looked like he wanted to talk into the road. I was right - he walked out of the ditch and into the middle of the road, still dripping water from his chin. He stopped when he got to the dividing line in the highway, front legs in my lane, back legs in the other lane. Moose Alley is a lonely stretch of road, so there weren't any other cars around. It was just me and the moose. He didn't appear to be in any kind of rush to move and I was, so I beeped my horn at him. He turned his head and looked at me, contemplating whether it was worth it to stomp Bear's car (and me) into the pavement. Note to self: Do NOT Honk at Moose! He turned 180 degrees and faced the ditch again. Silently this time I encouraged the moose to move. He didn't. He took two steps, turned around again and walked two steps back. This continuted for FIVE MINUTES until finally, another car appeared on the road behind me. When it got close enough the moose slowly stepped off the road, disappearing into the trees. I drove the rest of the way home thankful that the moose hadn't taken my honking personally. I have my camera with me today, so if I see any more, I will take pitcures to post.