New to Me, Anyway

Last Friday I was driving home, minding my own business, when my car started acting funny. When I pressed on the gas pedal, I got no response. The idle sunk really low, and just as I pulled off the road, it stalled.

Uh oh. This is not good.

I managed to get the car re-started and running long enough to get it into a parking spot at the local grocery store. I called my husband and he got in touch with our wonderful mechanic. Mikey (the mechanic) drove his tow truck the 35 miles to get the car. He started the car, got it on the tow truck, got out and announced, "Well - you pooched it." Which is Mikey speak for I killed it. Apparently I dropped a valve in the motor, which is unfixable.

So my husband and I discussed it and realized that we needed a new vehicle. Something that would be a solid commuter car for me and comfortable to ride in for both of us. We wanted something the dog would fit in comfortably, too. Oh yeah - and we had to be able to afford it.

We spent the entire day Wednesday looking at used cars. We went to six or eight dealerships, test dove four or five cars, and ended up with this: 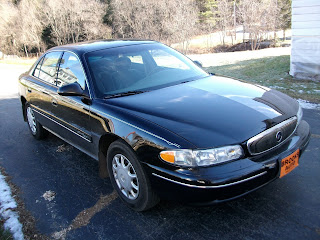 A 2002 Buick Century Custom. It's awfully pretty! It rides so comfortably. I love it. I admit we were both hoping for something a little more "age appropriate" - another Pontiac would have been awesome, but this was simply the best fit and the best deal. The guy who sold it to us has been selling cars for 43 years, and was super nice. He puts brand new tires on every single one of the cars he sells, because he believes in doing right by people. Awww! I'm so pleased with this car! Of course, Bear's been driving it all over so I haven't had much of a chance yet, but I will. Here are a few more pics: 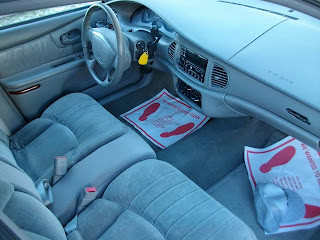 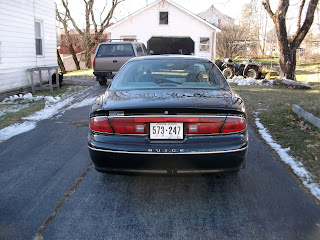 Birds of A Feather said...

Loving the pimpmobile. Sorry your other car had to go and die on you so close to the holidays. Just glad you have something safe to get you back and forth to work.

You can pretend you're royalty!

You will totally rock this car.

You know what they say, Alice... if this car's a rockin', don't come a knockin'!


Or is that not what you meant?